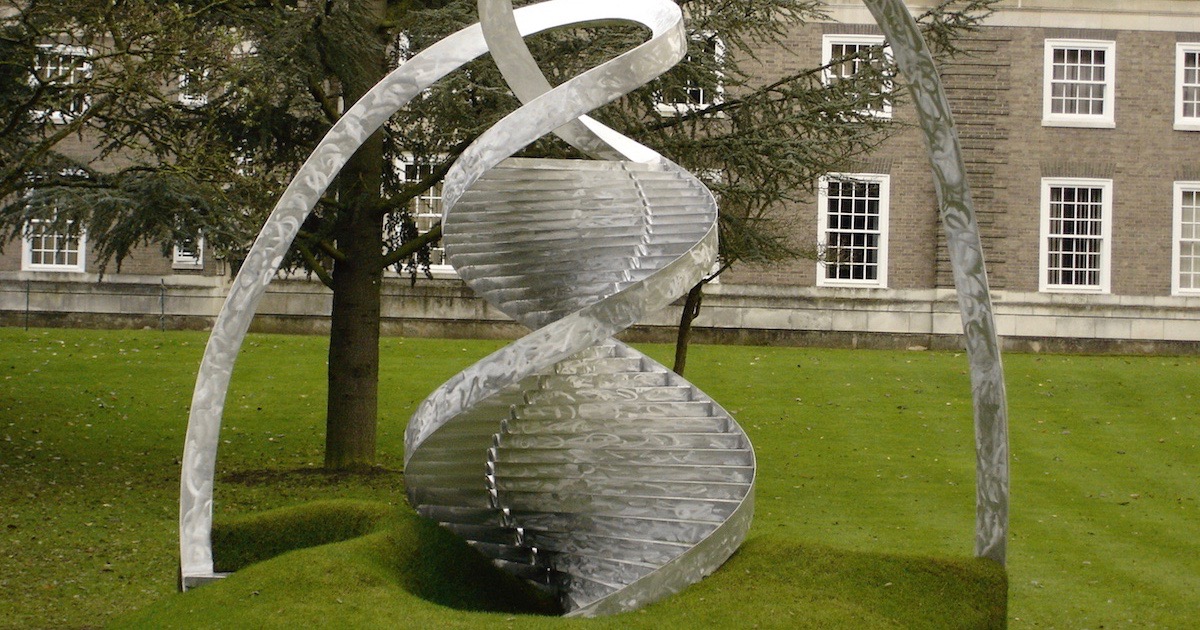 Before Darwin, biologists attributed the beauty, integrated complexity, and adaptation of organisms to their environments to a powerful designing intelligence. Consequently, they also thought the study of life rendered the activity of a designing intelligence detectable in the natural world.

Yet Darwin argued that this appearance of design could be more simply explained as the product of a purely undirected mechanism, namely, natural selection and random variation. Modern neo-Darwinists have similarly asserted that the undirected process of natural selection and random mutation produced the intricate designed-like structures in living systems. They affirm that natural selection can mimic the powers of a designing intelligence without itself being guided by an intelligent agent. Thus, living organisms may look designed, but on this view, that appearance is illusory and, consequently, the study of life does not render the activity of a designing intelligence detectable in the natural world. As Darwin himself insisted, “There seems to be no more design in the variability of organic beings and in the action of natural selection, than in the course in which the wind blows.”2 Or as the eminent evolutionary biologist Francisco Ayala has argued, Darwin accounted for “design without a designer” and showed “that the directive organization of living beings can be explained as the result of a natural process, natural selection, without any need to resort to a Creator or other external agent.”3

But did Darwin explain away all evidence of apparent design in biology? Darwin attempted to explain the origin of new living forms starting from simpler pre-existing forms of life, but his theory of evolution by natural selection did not even attempt to explain the origin of life — the simplest living cell — in the first place. Yet there is now compelling evidence of intelligent design in the inner recesses of even the simplest living one-celled organisms. Moreover, there is a key feature of living cells — one that makes the intelligent design of life detectable — that Darwin didn’t know about and that contemporary evolutionary theorists have not explained away.

In 1953 when Watson and Crick elucidated the structure of the DNA molecule, they made a startling discovery. The structure of DNA allows it to store information in the form of a four-character digital code. Strings of precisely sequenced chemicals called nucleotide bases store and transmit the assembly instructions — the information — for building the crucial protein molecules and machines the cell needs to survive.

Francis Crick later developed this idea with his famous “sequence hypothesis” according to which the chemical constituents in DNA function like letters in a written language or symbols in a computer code. Just as English letters may convey a particular message depending on their arrangement, so too do certain sequences of chemical bases along the spine of a DNA molecule convey precise instructions for building proteins. The arrangement of the chemical characters determines the function of the sequence as a whole. Thus, the DNA molecule has the same property of “sequence specificity” that characterizes codes and language.

Moreover, DNA sequences do not just possess “information” in the strictly mathematical sense described by pioneering information theorist Claude Shannon. Shannon related the amount of information in a sequence of symbols to the improbability of the sequence (and the reduction of uncertainty associated with it). But DNA base sequences do not just exhibit a mathematically measurable degree of improbability. Instead, DNA contains information in the richer and more ordinary dictionary sense of “alternative sequences or arrangements of characters that produce a specific effect.” DNA base sequences convey instructions. They perform functions and produce specific effects. Thus, they not only possess “Shannon information,” but also what has been called “specified” or “functional information.”

Like the precisely arranged zeros and ones in a computer program, the chemical bases in DNA convey instructions by virtue of their specific arrangement — and in accord with an independent symbol convention known as the “genetic code.” Thus, biologist Richard Dawkins notes that “the machine code of the genes is uncannily computer-like.”4 Similarly, Bill Gates observes that “DNA is like a computer program, but far, far more advanced than any software we’ve ever created.”5 Similarly, biotechnologist Leroy Hood describes the information in DNA as “digital code.”6

After the early 1960s, further discoveries revealed that the digital information in DNA and RNA is only part of a complex information processing system — an advanced form of nanotechnology that both mirrors and exceeds our own in its complexity, design logic, and information storage density.

Where did the information in the cell come from? And how did the cell’s complex information processing system arise? These questions lie at the heart of contemporary origin-of-life research. Clearly, the informational features of the cell at least appear designed. And, as I show in extensive detail in my book Signature in the Cell, no theory of undirected chemical evolution explains the origin of the information needed to build the first living cell.7

Why? There is simply too much information in the cell to be explained by chance alone. And attempts to explain the origin of information as the consequence of pre-biotic natural selection acting on random changes inevitably presuppose precisely what needs explaining, namely, reams of pre-existing genetic information. The information in DNA also defies explanation by reference to the laws of chemistry. Saying otherwise is like saying a newspaper headline might arise from the chemical attraction between ink and paper. Clearly something more is at work.

This connection between information and prior intelligence enables us to detect or infer intelligent activity even from unobservable sources in the distant past. Archeologists infer ancient scribes from hieroglyphic inscriptions. SETI’s search for extraterrestrial intelligence presupposes that information imbedded in electromagnetic signals from space would indicate an intelligent source. Radio astronomers have not found any such signal from distant star systems; but closer to home, molecular biologists have discovered information in the cell, suggesting — by the same logic that underwrites the SETI program and ordinary scientific reasoning about other informational artifacts — an intelligent source.

DNA functions like a software program and contains specified information just as software does. We know from experience that software comes from programmers. We know generally that specified information — whether inscribed in hieroglyphics, written in a book, or encoded in a radio signal — always arises from an intelligent source. So the discovery of such information in the DNA molecule provides strong grounds for inferring (or detecting) that intelligence played a role in the origin of DNA, even if we weren’t there to observe the system coming into existence.

The Logic of Design Detection

In The Design Inference, mathematician William Dembski explicates the logic of design detection. His work reinforces the conclusion that the specified information present in DNA points to a designing mind.

Dembski shows that rational agents often detect the prior activity of other designing minds by the character of the effects they leave behind. Archaeologists assume that rational agents produced the inscriptions on the Rosetta Stone. Insurance fraud investigators detect certain “cheating patterns” that suggest intentional manipulation of circumstances rather than a natural disaster. Cryptographers distinguish between random signals and those carrying encoded messages, the latter indicating an intelligent source. Recognizing the activity of intelligent agents constitutes a common and fully rational mode of inference.

More importantly, Dembski explicates criteria by which rational agents recognize or detect the effects of other rational agents, and distinguish them from the effects of natural causes. He demonstrates that systems or sequences with the joint properties of “high complexity” (or small probability) and “specification” invariably result from intelligent causes, not chance or physical-chemical laws.9 Dembski noted that complex sequences exhibit an irregular and improbable arrangement that defies expression by a simple rule or algorithm, whereas specification involves a match or correspondence between a physical system or sequence and an independently recognizable pattern or set of functional requirements.

By way of illustration, consider the following three sets of symbols:

TIME AND TIDE WAIT FOR NO MAN

The first two sequences are complex because both defy reduction to a simple rule. Each represents a highly irregular, aperiodic, improbable sequence. The third sequence is not complex, but is instead highly ordered and repetitive. Of the two complex sequences, only the second, however, exemplifies a set of independent functional requirements — i.e., is specified.

English has many such functional requirements. For example, to convey meaning in English one must employ existing conventions of vocabulary (associations of symbol sequences with particular objects, concepts, or ideas) and existing conventions of syntax and grammar. When symbol arrangements “match” existing vocabulary and grammatical conventions (i.e., functional requirements), communication can occur. Such arrangements exhibit “specification.” The sequence “Time and tide wait for no man” clearly exhibits such a match, and thus performs a communication function.

In my book Signature in the Cell, I show that Dembski’s joint criteria of complexity and specification are equivalent to “functional” or “specified information.” I also show that the coding regions of DNA exemplify both high complexity and specification and, thus not surprisingly, also contain “specified information.” Consequently, Dembski’s scientific method of design detection reinforces the conclusion that the digital information in DNA indicates prior intelligent activity.

So, contrary to media reports, the theory of intelligent design is not based upon ignorance or “gaps” in our knowledge, but on scientific discoveries about DNA and on established scientific methods of reasoning in which our uniform experience of cause and effect guides our inferences about the kinds of causes that produce (or best explain) different types of events or sequences.

The evidence of design in living cells is not the only such evidence in nature. Modern physics now reveals evidence of intelligent design in the very fabric of the universe. Since the 1960s physicists have recognized that the initial conditions and the laws and constants of physics are finely tuned, against all odds, to make life possible. Even extremely slight alterations in the values of many independent factors — such as the expansion rate of the universe, the speed of light, and the precise strength of gravitational or electromagnetic attraction — would render life impossible. Physicists refer to these factors as “anthropic coincidences” and to the fortunate convergence of all these coincidences as the “fine-tuning of the universe.”

Many have noted that this fine-tuning strongly suggests design by a pre-existent intelligence. Physicist Paul Davies has said that “the impression of design is overwhelming.”10 Fred Hoyle argued that, “A common sense interpretation of the facts suggests that a superintellect has monkeyed with physics, as well as chemistry and biology.”11 Many physicists now concur. They would argue that — in effect — the dials in the cosmic control room appear finely-tuned because someone carefully fine-tuned them.

To explain the vast improbabilities associated with these fine-tuning parameters, some physicists have postulated not a “fine-tuner” or intelligent designer, but the existence of a vast number of other parallel universes. This “multiverse” concept also necessarily posits various mechanisms for producing these universes. On this view, having some mechanism for generating new universes would increase the number of opportunities for a life-friendly universe such as our own to arise — making ours something like a lucky winner of a cosmic lottery.

But advocates of these multiverse proposals have overlooked an obvious problem. The speculative cosmologies (such as inflationary cosmology and string theory) they propose for generating alternative universes invariably invoke mechanisms that themselves require fine-tuning, thus begging the question as to the origin of that prior fine-tuning. Indeed, all the various materialistic explanations for the origin of the fine-tuning — i.e., the explanations that attempt to explain the fine-tuning without invoking intelligent design — invariably invoke prior unexplained fine-tuning.

And that makes intelligent design detectable in both the physical parameters of the universe and the information-bearing properties of life.