Was Christ a Copycat?

Every year around Easter there is a surge of skepticism about the existence of Jesus. Is it true that Jesus is just one of many gods said to have been born of a virgin, died, and resurrected?

Those who encounter this claim online or elsewhere may start to wonder about the truth of New Testament history. Is the account of Christ simply a retelling of “dying and rising” pagan gods? If Jesus’ life does parallel other gods, does that mean Jesus is also a myth?

This argument implies that if gods we consider false claim the same things that Christianity claims, Christianity must also be false. This ‘guilt by association’ mindset attempts to discredit the accounts of the Gospels by suggesting that life events attributed to Jesus are recycled bits of storytelling that are popular across different cultures and time periods.

So what is a believer to think in the face of such bold assertions?

There are two important questions that a believer should ask when encountering themselves when tackling the “Jesus myth”:

1) Are these alleged parallels to pagan gods historically accurate?

2) If they were, what difference would it make? 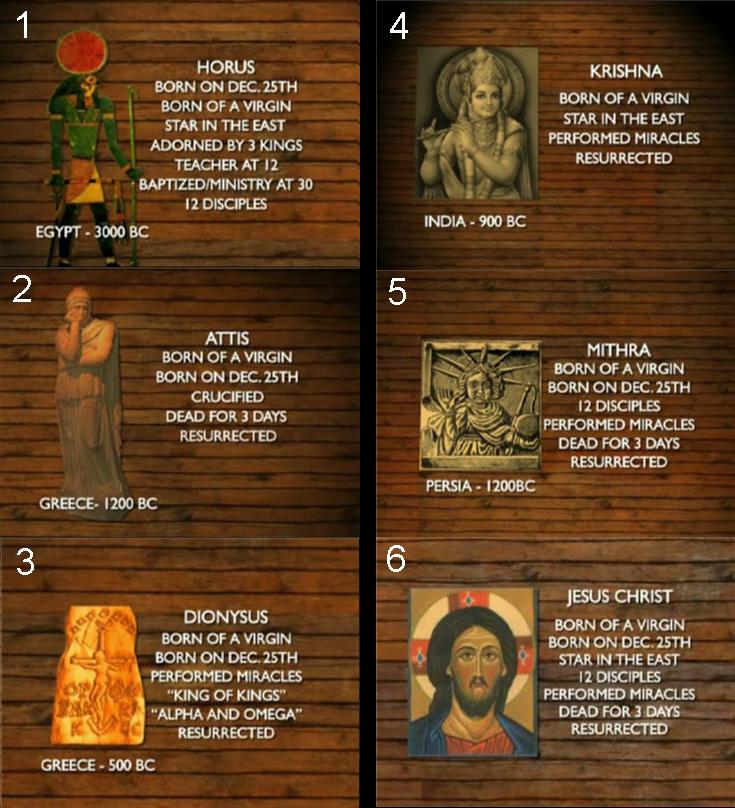 This chart is frequently circulated as proof of Christ being a copy of pagan gods. Click for full image.

Are there really a number of gods who have biographies shockingly similar to that of Jesus of Nazareth? Names that are commonly included in this group of similar gods include Mithras, Dionysus, and Osiris, among others.

This image is one version of this attack on the deity of Christ that is continually circulating online. Some claim that other gods share the attributes of being virgin-born, being born on December 25th (which is not in the Bible, by the way), performing the same kinds of miracles Jesus did, dying (in some cases being crucified), and miraculously resurrecting from the dead.

Let’s examine several of the pagan gods that Christianity is alleged to have plagiarized, as well as three of these ‘shared’ life events: a virgin birth, death, and resurrection.

Unless you consider emerging fully grown out of a rock being born of a virgin, this god already has one strike against being similar to Jesus. Certainly, he must have been crucified, right? No. Actually, Mithras didn’t even die–he was believed to be taken to paradise on a chariot when still alive. Since he didn’t die, he didn’t resurrect from the dead. Three strikes, you’re out!

Also known as Bachus, Dionysus doesn’t fare much better. He was said to be conceived out of an affair between Zeus and a mortal woman, Semele. After Zeus’ wife, Hera, found out she tricked the mortal into demanding that Zeus reveal himself in all his glory. He begrudgingly agreed, knowing that this would kill her. He was, however, able to rescue Dionysus and sewed him (or his heart) into his thigh until he was born. This is the claim for his ‘rebirth’–a far cry from the death and bodily resurrection of Jesus.

There is no birth story recorded in regards to Osiris. He was eventually killed by his own brother, torn into 14 pieces, and strewn about Egypt. His sister (and wife), Isis, gathered and buried almost all of the pieces. Osiris became the ruler of the underworld as the god of the dead. Some versions of the life of Horus say that Osiris was magically reassembled by Isis and impregnated her before becoming ruler of the underworld. Even if this version is to be preferred, it is worth noting that, unlike Jesus, Osiris would have been brought back to life by another rather than by his own power.

As mentioned above, most versions of the birth of Horus are the result of a sexual relationship between Osiris and his wife-sister Isis. Some claim that Horus was crucified, but this is not only unsupported by history but is a major anachronism. Crucifixion was a Roman method of execution put into practice thousands of years later. They may as well say that Horus was killed in a motorcycle crash.

Rather than being crucified, most versions of the Horus myth do not have a death recorded at all. In some instances, it was believed that he merged with the sun god, Re, and each sunrise is a symbol of him being reborn each day. Again, this is hardly parallel to the resurrection of Jesus.

Let’s Pretend it was True

The above exercise can be continued to address all of the many different gods that Christ is alleged to have been copied from. As you can see, claims of pagan plagiarism are unfounded and terribly inaccurate. Even so, you may still encounter arguments that attempt to debunk refutations of the “facts” in the above chart. Fortunately, a proper defense of Jesus’ unique claims to deity does not hinge solely on an examination of these other gods.

Let’s pretend that one or more of the above gods really did share the same biography as Jesus, particularly in the areas of their birth, death, and resurrection. Would this disprove the Gospel accounts of Christ?

The short answer is no, it wouldn’t. Here’s why: we determine the historical accuracy of an event or person based on evidence, not on uniqueness. We do not demand that the details be completely unique in order to consider them to be true.

Take this example as shared by Greg Koukl of Stand To Reason:

Did you know there’s a book that was written around the turn-of-the-last-century about a ship that was an unsinkable ship, which hit an iceberg on its maiden voyage and sank? The name of the ship was the Titan. This is remarkable because some 15 years later the Titanic sunk on its maiden voyage after hitting an iceberg. Now, what if you had read the novel and then later heard that a ship called the Titanic had actually sunk? I’m sure you can see that rejecting the story of the Titanic on its face would be foolish only because you’d read a novel similar to the actual event. Whether or not the Titanic sank is determined by the evidence for its sinking, unrelated to any other fictional stories that were like it.

Even if an historical event shares characteristics of a mythological one, the reality of what happened is not diminished. The truth of an event is determined by the evidence for or against it, not in an absence of similar fictional claims.

Does this refutation of the “Jesus myth” allegation prove that Jesus existed? Actually no, it does not. It does, however, effectively dismantle an attack on Jesus as an historical figure and properly frames the question as one of evidence.

Remember, our aim as apologists is to help others separate fact from fiction and lovingly point them towards the person of Jesus (Tweet That). Once you have removed this false allegation as a potential explanation for a belief in the historical Jesus, you can then discuss the overwhelming evidence that supports His life, death, and resurrection.

The Case for the Real Jesus, by Lee Strobel.
Chapter 4 is particularly relevant to the above material.

GotQuestions.org | Is Jesus a Myth?